Anne Marchand at the International Museum of Art & Science

The paintings in the exhibition, Abstractions: Anne Marchand, trace the evolution of her abstract work, which is animated by expressive color and the inventive use of materials.

Marchand creates vibrant paintings that evoke a sense of cosmic and bodily energy. Her large-scale works are in constant transformation, and suggest the movement of natural forces, patterns of growth, the insistence of memory, and inner states of feeling.

The exhibition’s earlier works grew out Marchand’s involvement with images of galaxies, nebulae, and planets from the Hubble telescope. These paintings have countervailing arcs and circular forms reminiscent of elliptical orbits and heavenly bodies. Curves play against sheets of color established by vigorous paint handling, implying a sense of order inscribed on a world in constant flux.

Marchand’s paintings allow poetic associations to arise naturally. She wrote that, “During the process of painting a new insight is released…. Qualities of radiance and light became active metaphors reflecting an inner state of being.” It became apparent to her that “there was a connection between deep space and the human body – it is all the same energy in the macrocosm and the microcosm.”

LEARN MORE ABOUT THE EXHIBITION 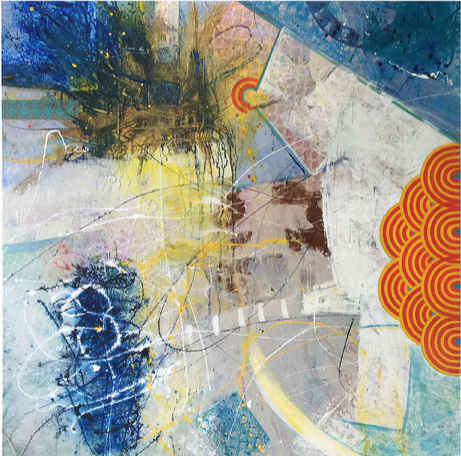